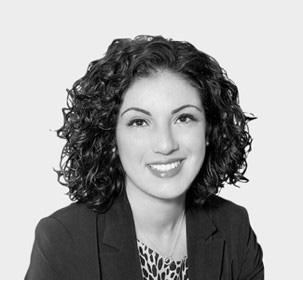 Discussions in Mr. Purdy's Gr. 12 law class always spark debate. In the 2004/2005 school year, the class also sparked Nadia Marotta's (VC05) desire to become a lawyer. "I remember going on a field trip to the Toronto courthouse," she says. "After we left Court, we visited the Faculty of Law at U of T. I have a strong memory of myself, in my VC uniform, standing outside the Bora Laskin Law Library. I told myself I would be a student there one day."

After spending many a long day and countless hours in that same library, Nadia is now a proud graduate of University of Toronto's Faculty of Law. She was called to the bar in June of 2013, and is currently an associate lawyer at one of the top litigation boutiques in Toronto. 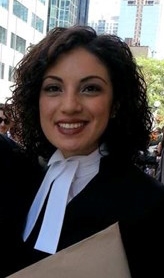 Always a hard worker with incredible heart and determination, Nadia's incredible achievements in her career and academically at both the undergraduate and graduate levels come as no surprise to her friends and former VC teachers. At the VC's 2005 convocation, Nadia was awarded for her excellence in academics and music. Her accolades followed her to University, where she was a Dean's List scholar every year of her undergraduate study of English Literature. At her undergraduate convocation, she was awarded a Gold Medal for having one of the highest overall GPAs in the St. Michael's College's 2009 graduating class, and a prize for excellence in English literature.

Despite living and working in the hustle and bustle of Toronto's corporate core, Nadia is still close to her roots, and looks back fondly on her time at VC. While law class and her first court appearance as a member of VC's inaugural Mock Trial team hold fond memories for her, her most cherished memories are associated with the 2001-2005 Concert Band. Nadia was very involved in the music program during her time at VC, and played an integral role in planning the first VC Band tour of Italy. "We spent two weeks in March travelling through Italy and playing concerts," she reminisces. "It was a once in a lifetime experience. I will never forget that trip and the laughs I shared with [Conductor and music teacher] Mr. Leonardelli and my fellow band members." While she hasn't picked up her flute in a few years, Nadia still catches herself humming "Ash Lawn Echoes" âa piece which won the VC band a first place at the Kiwanis Festival in 2003âevery once in a while.

Her advice to current VC students? "Cherish the friends that you make at VC because they may be some of the most important connections you'll ever make. I feel so blessed that the four best friends I made at VC are still a big part of my life today."